My first attempt at Nanaimo Bars 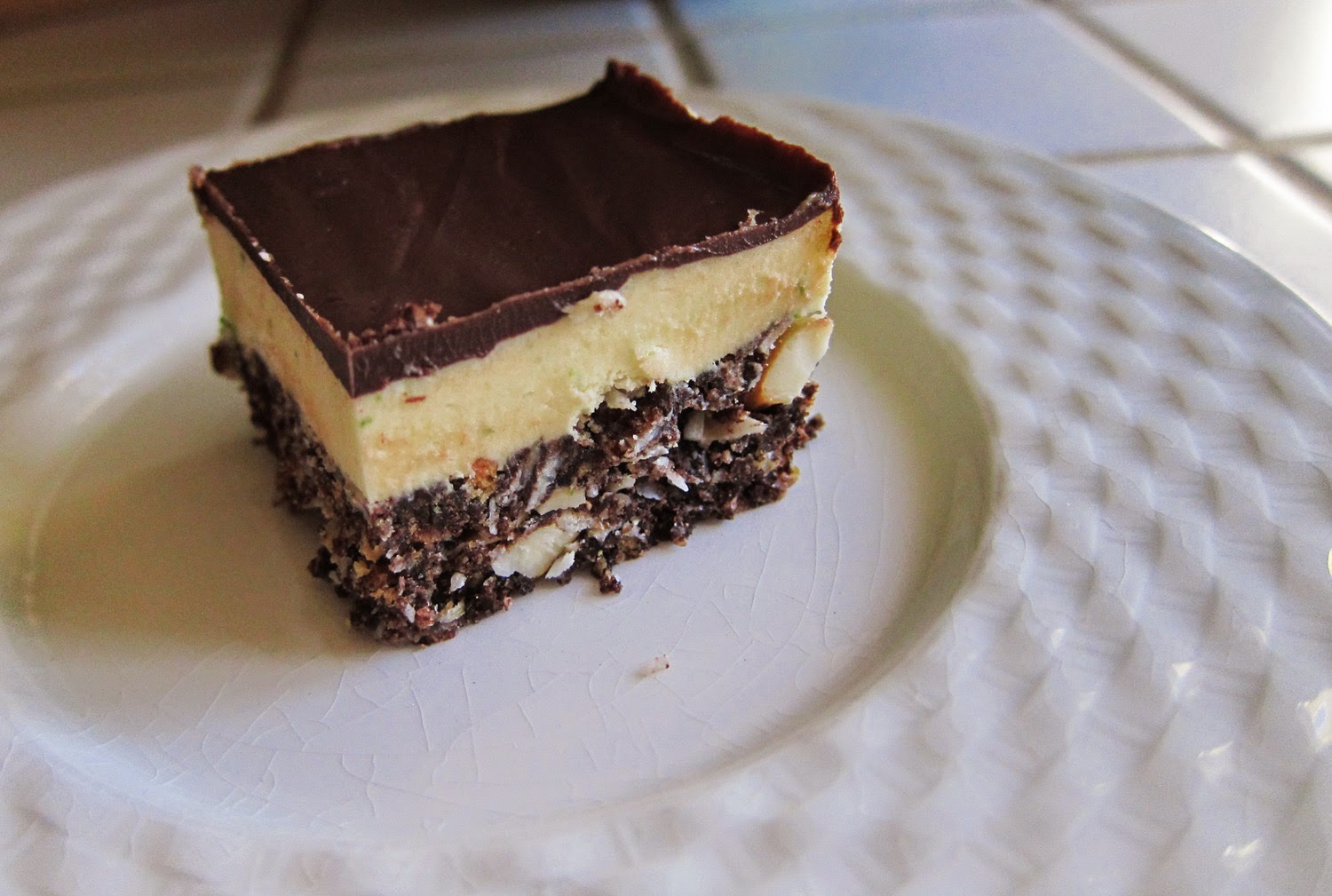 For the past couple weeks, I've had a severe craving for Nanaimo Bars and/or Lemon Bars (or lime, mmmmmm liiiiime).

I found a bunch of varying recipes for each online but none of them really seemed to be what i wanted. I finally decided to mix both cravings together in my own zany way and created these evil yummies: Zesty Lime Nanaimo Bars.

They're not just good, they're decadently scrumptious! (and by far the least healthy recipe you'll find here) 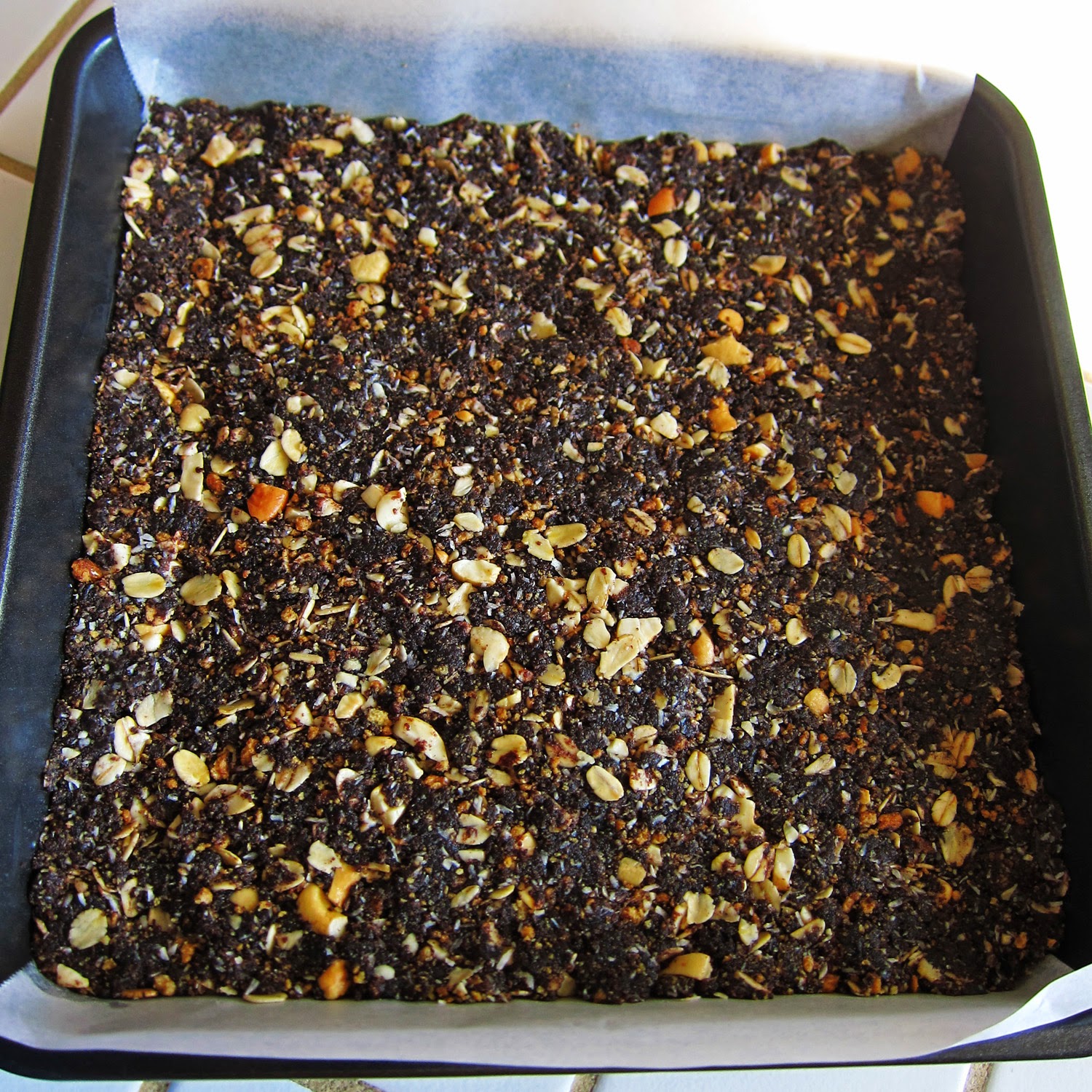 Mix last 4 ingredients and set aside. Melt first 4 ingredients in top of double boiler. Add egg and stir to cook and thicken. Remove from heat. Stir in graham mix 'til well combined. Press firmly into a parchment paper lined 8" x 8" pan (be sure to let the parchment paper overflow on two sides in order to pull out the block once finished). Chill in refrigerator while you prepare the next layer. 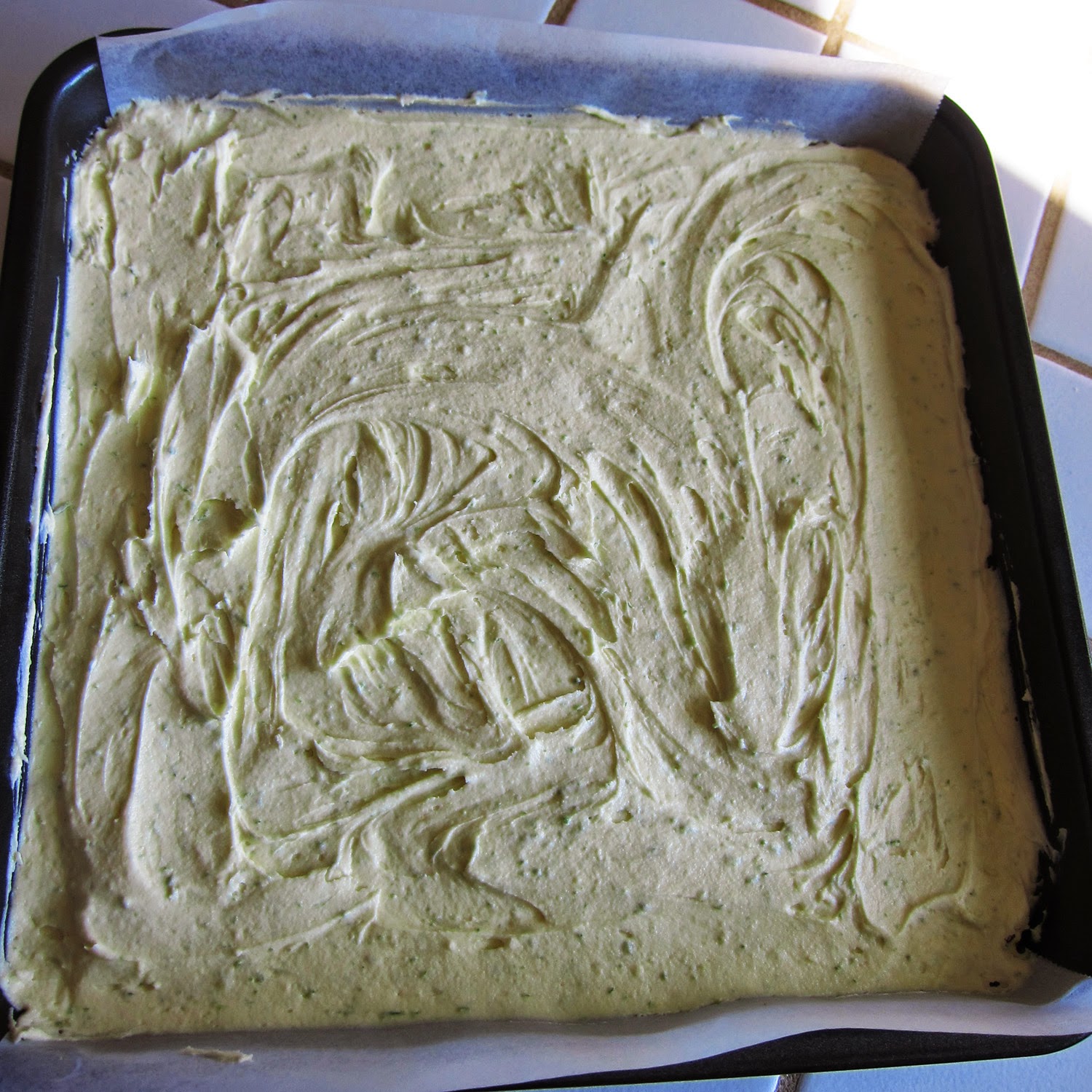 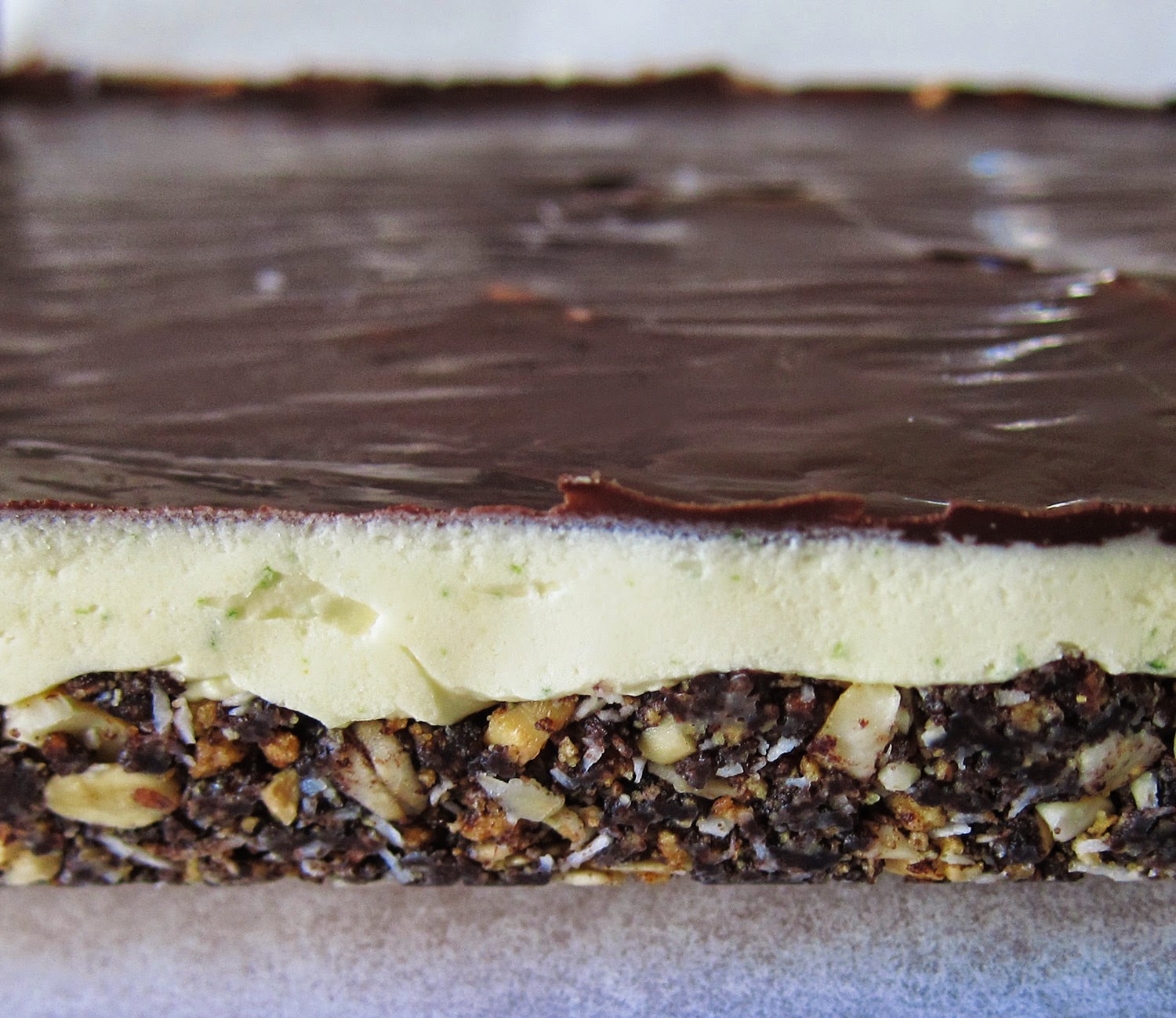 Melt chocolate and coconut oil in a double boiler. Cool slightly then pour over second layer and chill in refrigerator again.

Before cutting, remove from refrigerator for 10-15 minutes to avoid cracking the top layer. Gently pull out of pan using the parchment paper flaps. Cut into small squares (I cut mine 6x6 so each square is approx 2-3cm wide, ie just big enough without over doing it). Store in the refrigerator in airtight containers.

ps. I'm not responsible for pounds/kilos gained or teeth lost   :P
Posted by sofi at 21:12 No comments:

We all know someone who was bullied at one time or another. My son was bullied in school for years. He was ostracized for no other reason than being an easy target. We had to change school, visit a psychiatrist for a while and now he's doing fine. Who was to blame? The kids who ostracized him? The school for not reacting? The parents of the lead bully? All of the above? Either way, the damage is done and my son will carry it with him 'til the end of his days.

Kids will get bullied for ANYTHING. You stand out in any possible way (too fat, too skinny, another color, nerdy, poor, etc), it's almost inevitable that you'll be bullied at some point or other. But we expect this type of behavior from kids, not full grown adults, right? Wrong. Something happened this week that simply blew me away... and brought the bar way down on my hopes for humanity.

My mother recently purchased a small house in a gated "retirement" community, far away from winter and the effects it has on her every year. My mom's special: a tad eccentric, a little wild, a bit over-the-top at times, but mostly she's young at heart. She's 63, barely looks/acts like 50-something. She works hard, eats right and exercises regularly in order to stay that way. She has ups and downs but hers are a little more intense than yours or mine, kinda comes with being bipolar. Anyway, escaping winter has become a necessary thing and she finally found a quaint little nest to call home when the thermometer drops.

The community she migrates to houses several friends from the past, fun like-minded people to enjoy life with. It also houses a bunch of other people, who seemed fun at first glance but maybe they were just being polite. Turns out, as a slim single independent woman in such a community, she was instantly labeled "Barbie" and shun/ostracized for being healthy (ie not fat) and having fun/being happy/enjoying life to the fullest. WTF?!?! These same people/hypocrites "like" and share those "Stop Bullying!" images on social media. Really?... REALLY!?!?

"Stop Bullying" you say? Pfff. To the people living in that warm gated community, and to all the others just like them out there (I sincerely hope you'll recognize yourselves): grow-up or grow a brain but for fuckssake, WAKE-UP.

Bullying will stop when everyone recognizes that we are all potential bullies.

I came across this brownies recipe and just *had* to try it: brownies made with sweet potatoes?!?!? Whhaaaaaa?? Yeah, I had great doubts too, but these puppies will seriously surprise you (and get you instantly addicted, yep).

As usual (can't help it), I modified the original recipe a bit because: 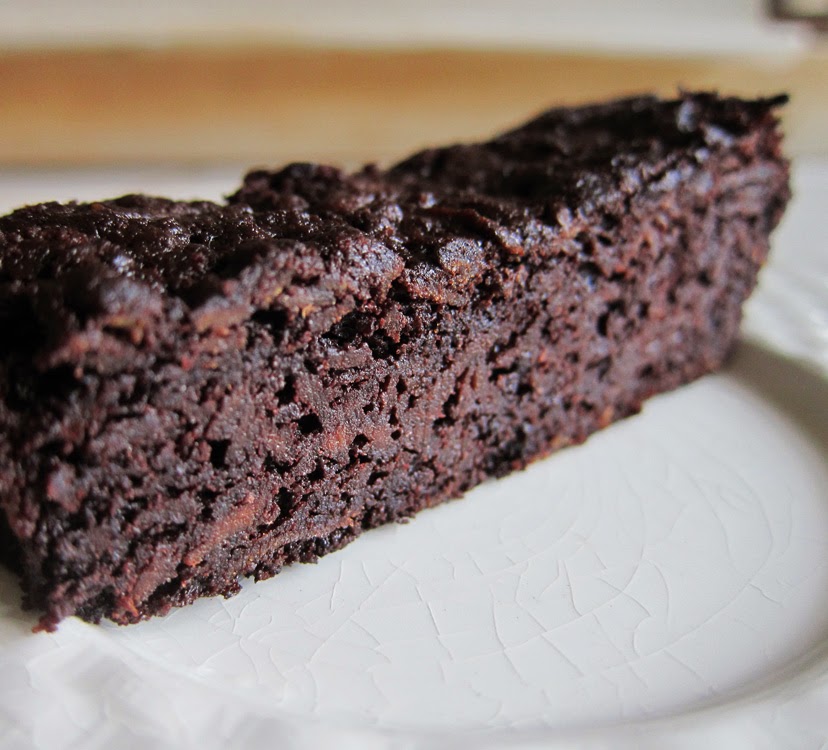 As an extra, you could melt some dark chocolate in a bowl over boiling water and drizzle/spread it over the top. You could also top them with fruit (raspberries, strawberries, mango, blueberries... anything really). Or you could even top them with store bought "gluten-free" icing (it may contain no gluten but the sugar/fat levels are waaaaayyyy up there). Personally, I prefer them as is.  <:)
Posted by sofi at 14:49 No comments: 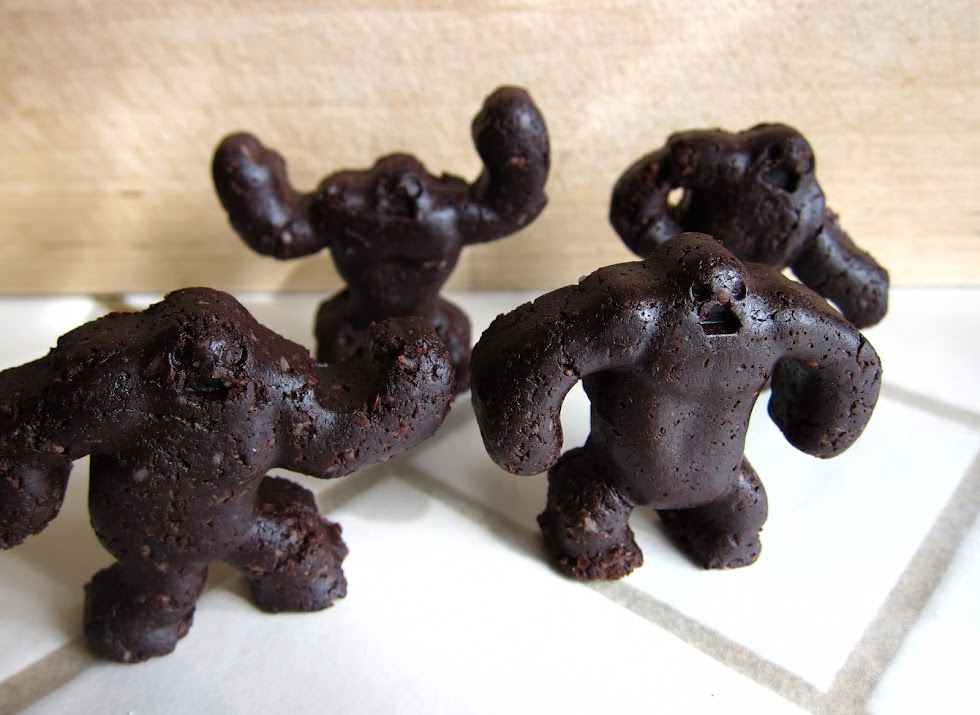 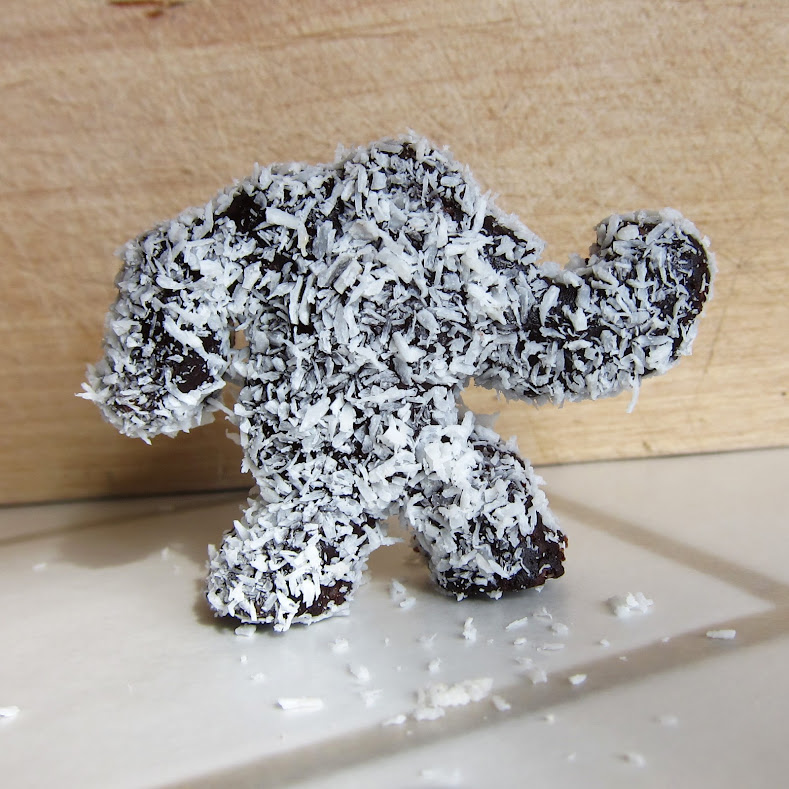 Spring in my kitchen 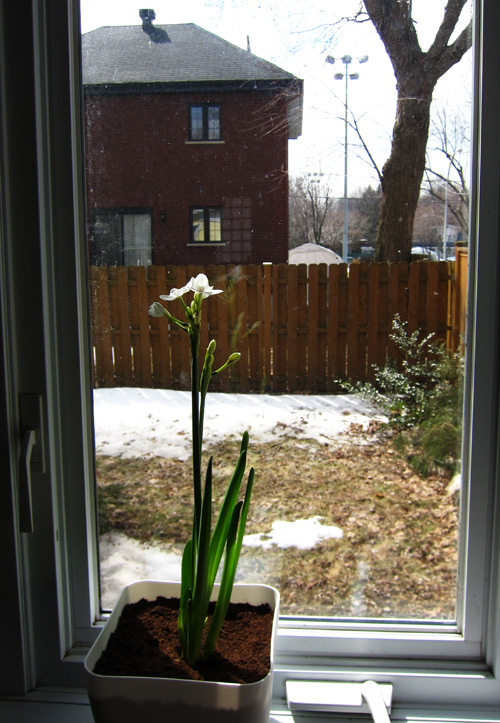 I've had it with winter. Not quite sure why this year more than others but it's gotta end. Snow, cold, slush, boots, mittens, giant winter coats and nasty static cling, enough! In a futile act of defiance, I started wearing tank tops... in February. Pfff, what was I thinking?

By early March, my need to play in the dirt got too intense, there was no way I was going to hold off 'til late april, no way. So I started re-potting all the plants in the house. When I went to the store for supplies (ie dirt, and lots of it), I found these great little "plant and grow" narcissus kits (what can I say, I'm a sucker for liquidation sales). It was perfect! I wouldn't have to wait for the crocus and tulips to show, I'd bring spring inside! And it'd be a fun project with the kids, too.

We set it up on the sunniest windowsill (kitchen) and within days (two, tops), it was already poking its first shoot trough the dirt. We were all quite impressed at how fast it grew, at least a few inches per day. I sat next to it for a while at lunch once and I'm sure i saw it grow a bit, honest. And then, the moment we were all waiting for: it bloomed... Oh. My. God. THE STENCH!! I walked into the kitchen and though the cat had peed on the floor, or the rats had escaped their cage and used the kitchen as a giant litter. It was beyond gross.

As I moved around, sniffing the air, searching for the source, I finally realized the horrible sinus raking stench was coming from the freshly bloomed narcissus. Aw man! But wait, get this: it's not the kind with just one flower at the end of the shoot, oh no no no! It's a pod full of small ones, and there are 4 such shoots, so far. If this one tiny bloom is stinking up the entire kitchen, what's it going to be like when its 12 other pod-lings bloom too?!?!? Wrong, just plain wrong. People grow these things indoors on PURPOSE?! Really!?!? Have they no sense of smell?! Fuck this, bring back winter. Indoor spring at the yellow house has officially been cancelled due to unforeseen stinkage. *sigh*
Posted by sofi at 12:18 No comments:

Email ThisBlogThis!Share to TwitterShare to FacebookShare to Pinterest
Labels: nonsense, slice of life 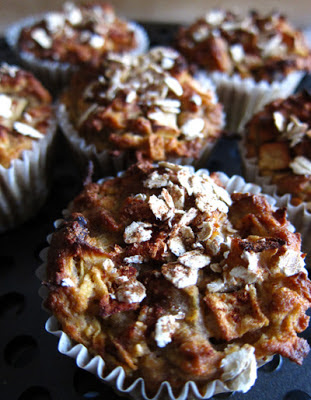 i wanted to make apple muffins from scratch so i started with the base used for my kickass banana muffins. worked out rrrrrreally good, the kids keep requesting more!  :)

preheat oven at 350.
prepare dry mix and set aside. (you can add a bit of ground cinnamon to the dry mix too)
peel 6 apples. in a large bowl, grate them to the core with a cheese grater (yep, you read right). add lemon juice and stir. mix syrup, eggs and oil together. add to the apples once blended.
incorporate dry mix being careful not to over stir (ie stop when no more dry mix is visible). add cranberries and fold through (did i mention not to over stir? it's what makes the difference between rock-hard-muffins and fluffy-yummy-muffins).
scoop into muffin pan [i like to use x-large wax paper liners instead of butter, less clean-up + prettier].

now it's time for the 7th apple. peel and core, then cut into 12 pieces (one per muffin). cut each of the 12 pieces into smaller chunks (not too small, 4-5 makes a good size) and push them into the top of each muffin. for extra "mmmmm", sprinkle some oat flakes and ground cinnamon over the apple chunks. bake for 30-35 minutes.

NOTE: this recipe actually makes a little more than 12 muffins (14-ish). i've tried to cut it down but to no avail. one less apple: the muffins are too dry. i tried changing the dry mix: it's never as good as this one! your best bet would be to make a half recipe (or use the extra mix to make a galette style cookie, or bake in two batches of 7).
Posted by sofi at 20:53 No comments: 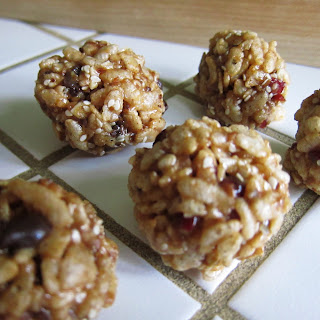 these are sooooo yummy!! again, we modified the original version a teeeeeny bit and made two versions of 'em: cranberry and chocolate. (though i don't see why combining them would be a bad thing, lol)

see link above for directions (cuz i'm too lazy to type it all and they did such a great job anyway, héhéhé). we didn't heat-up the mix in the microwave as suggested in the instructions, it sorta defeats the purpose of using all natural ingredients, i find.


* don't bother trying to mold these into anything but balls, we tried and failed.
** i'm not totally convinced about the sesame seeds yet, will try with 1tsp instead of 1tbsp.